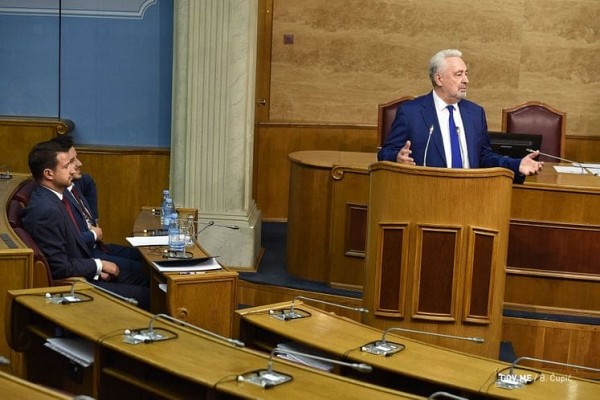 The Prime Minister of Montenegro, prof. Dr. Zdravko Krivokapić said that an anti-tourist campaign is being conducted against Montenegro and that this is being done both inside and out.

The most important fact is that Montenegro is a tourist hit in the whole of Europe. The facts speak for themselves. You know that we projected the budget at 65 percent, the IMF projection was at 70 percent in 2019. All that was overcome. For only the first half of this year, we achieved the same result as in the whole of 2020. Compared to 2019, that is 84 percent. The results will be tomorrow and I think they are much bigger. Also, that is ten times more than in the same period in 2020 ", said Prime Minister Krivokapić at the Prime Minister's Hour, answering the question of Boris Bogdanović from the Club of Deputies" Peace is our nation ".
The Prime Minister pointed out that this is a clear campaign that wants to show that this Government is incompetent, so there are no such results.
«That this Government is incompetent, that it has not done anything to create the preconditions for such a tourist season to happen. This Government does not even know how to predict, so its prediction is lower than what is happening on the ground. And what is happening on the field is shown by the fact that 87 percent of guests are in hotel accommodation compared to 2019, and 77 percent in private. See where our tourists come from ?! Although some politicians did not make a political step forward for their citizens to come to us. And tourists do not come only from the region. Take a look at tour operators connected to Montenegro, and some of them left Montenegro in 2018. Is Montenegro just a destination for exclusive tourism as you often want to present. The fact is that in all municipalities, even in the north, the number of tourists is a surprise for everyone who works in tourist organizations. Everyone expected much lower numbers. But the numbers here are unquestionable. They express everything and no one has adjusted them, and you have adjusted them. And when you talked about where Black is Mountain with green energy, you made numbers games. You want to create an eternal training ground for maintaining the dictatorial regime », said Prime Minister Krivokapić, addressing the opposition deputies.

The Prime Minister said that this would not happen again in Montenegro, because the people saw and understood that a secure voice no longer exists in Montenegro. «That the most important thing is a free vote, that there is not one job in state institutions, and four votes, that there are no envelopes that will fly into someone's pockets, that there are no people who want to keep one system ideologically at all costs. Montenegro has changed, conditions have changed. It changed the environment and the style of action. There are no more orders and commands, there is only work and results of work. These results may not be impressive for you, but for everyone, even for those in the international community, they are better than anyone expected. If that's small, I don't know what else to do. Maybe that is why this Government should be removed! ”Said Prime Minister Krivokapić.