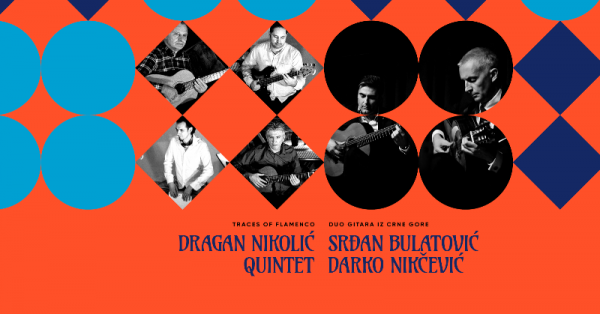 The XV Summer Festival of Guitar Art will take place from 15 to 20 August in several places in the Old Town of Herceg Novi under the motto «New Wind». A new round, the journey begins after a long break for everyone who wanted people, music, concerts and communication.

One of the currently most popular Italian bands, the guitar sensation «40 Fingers», will perform at the opening ceremony of the festival, which will hold a big concert in Montenegro for the first time on August 15 at the Kanli Kula in Herceg Novi.

The concert is part of the «Guitar Rhapsody» tour, a musical-scenic spectacle in which this famous guitar quartet will present famous film music, original songs, followed by an energetic part with cult melodies and popular arrangements of pop and rock hits in special arrangements for four guitars. .

Their planetary success begins the moment they record an extraordinary version of the Queen’s Bohemian Rhapsody, which has surpassed 5 million views on their Youtube channel at high speed.

Tickets are available at the box office of Herceg Fest, all info tourist points in Herceg Novi, as well as online through the site tickets.rs at a price of 20 €.

The second evening of the festival is reserved for the long-awaited concert of the legendary Yugoslav group Ođila on August 16 at the Novi Kanli Kula.

Ođila will hold a concert at the Novi Kanli Kula for the first time in her 30-year-long career, on this occasion. It will be an opportunity for the audience to hear numerous timeless Russian-Roma hits by Ođila, such as music from the Romen Theater in Moscow and music from the legendary films «Gypsies Fly in the Sky», «My Cute Cute Beast».

Tickets are available at the Herceg Fest box office, all info tourist points, as well as online via the tickets.rs website at a price of € 20.

The flamenco concert «Traces of flamenco» by Dragan Nikolić's quintet will be held on August 18 at the Forte Mare Fortress, and on August 19, the famous and award-winning Montenegrin duo Srdjan Bulatović & Darko Nikčević will hold a concert for all guitar lovers. Tickets for concerts on the Forte Mare stage are 10 euros and will be sold before the concert.

The festival traditionally organizes concerts on Mić Pavlović Square, also known as Music Square, where the Minneapolis Guitar Duo from the United States will perform on August 17, and Montenegrin guitarists participating in the Integration 2 project will perform at the closing ceremony of the festival on August 20. and then one of the greatest classical guitar virtuosos Hubert Käppel from Germany. Admission to the concerts is free.

As part of Guitar Visual Art, an exhibition «The Other Side of the Mirror» by Vitka Vujnović will be held from August 15 to 20 at the SueRyder Gallery.

This is the seventh solo exhibition of journalist and publicist Vitka Vujnović, partly a reflection of her love for her cities of Herceg Novi and Belgrade, the Novi cultural scene, festivals, especially the Guitar art summer fest… It is also a kind of dedication to the people she loves. Her «Other Side of the Mirror» is the reflection that cities and people leave in her eyes and soul.