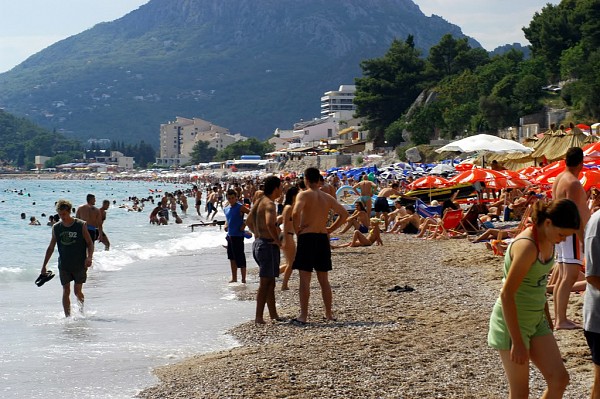 The issue of achieving health care for tens of thousands of tourists is certainly one of the most important, especially in the midst of the burden on health facilities by increasing the number of people infected with the corona virus. This summer, two tourist clinics are working along the Bar Riviera, in the Health Center and in Sutomore.

Unfortunately, for those who needed health services, the authorities could not provide the work of tourist clinics in Čanj, Veliki Pijesak and Utjeha.

The question is whether the authorities from the Municipality, the Health Center and the local community lightly gave up on the project of tourist clinics, and then the guests surprised them with their arrival in large numbers.

In any case, because of someone's earlier «we will easily», guests on the Riviera are suffering today.

The most difficult situation is among the guests on the Great Sands. Tourists complain about poor hygiene, a lot of garbage and sewage. On the beach, they point out, there is no toilet. These are mostly the reasons why many claim that he would no longer be vacationing at that remarkable destination. The hosts, on the other hand, claim that septic tanks spilled and that the feces ended up in the sea, which caused a large number of people suffering from the stomach virus, both children and adults.

Of course, the guests, through no fault of their own, will lose a few days of rest due to illness, with the necessary investment of additional effort because they will have to contact a doctor in Bar, which will further require additional costs.

As every year, the initiative on individual dispensaries had to come from the Health Center. And it came, as director Branko Purlija says. It didn't seem to be enough, though.

The president of MZ Mrkojevići, Senad Arabelović, reminds that in the run-up to the season, they discussed the opening of tourist clinics with the director of the Health Center and that this is the only address where you can ask for an answer and explanation why there are no clinics in tourist centers.

The President of the Association of Hoteliers, Caterers and Private Accommodation in Čanj, Momčilo Šćekić, is also, as says, he gave suggestions in writing to the Municipality and pointed out the steps that should be taken so that the season would not be endangered, and so that the risk of spreading the corona virus epidemic would be reduced to a minimum.

Purlija says that the health institution currently has 14 selected doctors, and a total of 17 who cover work with regular patients.

«They work in the Kovid ambulance, the mass vaccination point in two shifts, then in the outpatient ambulances Stari Bar, Sutomore, Mrkojevići, Virpazar and Ostros, so it is clear to the layman that we lack staff to organize tourist ambulances. At a constructive meeting. before the start of the season, it was decided not to open tourist clinics due to lack of staff, not even in Virpazar, where there is also an increased influx of foreign tourists, given that the clinic in Pecurice is relatively close to Veliki Pijesak and Utjeha, and Canj to Sutomore, „she said.

According to her, the HMP is in charge of taking care of emergencies.

“It simply came to our notice then and the fact that medical workers are human, that they are not immune to any disease and are entitled to temporary incapacity for work. In the end, Bar now has about 45,000 inhabitants, and the number of systematized doctors has not changed in the last 20 years, „she says.

“What is more difficult than in previous years is that the stomach virus, with an increase in body temperature, abdominal pain, vomiting, diarrhea, often» imitates «kovid symptoms, and a differential diagnosis must be made in each patient,» said Dr. Purlija.

«We are here to provide all kinds of logistics. There were proposals for an outpatient clinic in Canj, but there is no space there because the proposed hotel has been privatized, so they have nowhere to set up an outpatient clinic. for Veliki pijesak and Utjeha should be at the service of the ambulance in Pečurice.I agree that the issue is serious, but I repeat it is not within our competence.We are ready to provide any kind of logistical assistance.Although, the end is August, and if we wanted to we open them, we had to talk about it at the beginning of the summer, „Raicevic said.