From Saturday without masks outdoors

Bajic said that all other measures remain in force.

Up to 20 people are allowed to gather in public areas. «This is the only news regarding the measures that will be valid, I remind you once again, from Saturday, May 22 to Friday, May 28. The obligation to wear masks indoors remains in force, as well as all other prescribing measures,» he said. Bajic. He also says that the adoption of amendments to the Law on Protection of the Population from Infectious Diseases is pending.

«We emphasize that the conditions for the entry of foreign citizens into Montenegro have not been met changed. We remind you that only citizens of neighboring countries, namely Serbia, Croatia, Bosnia and Herzegovina, Albania and Kosovo, as well as Russia, Ukraine and Belarus, enter Montenegro without conditions. All others must have a negative PCR test or proof that they have antibodies or have proof that they were fully immunized at least seven days before arriving in Montenegro with any coronavirus vaccine, „Bajic said.

Bajic could not specify when Sputnik V vaccines will arrive, and as he said, the contracts for the supply of vaccines are secret, so he could not say whether Russia will bear some consequences due to the delay. 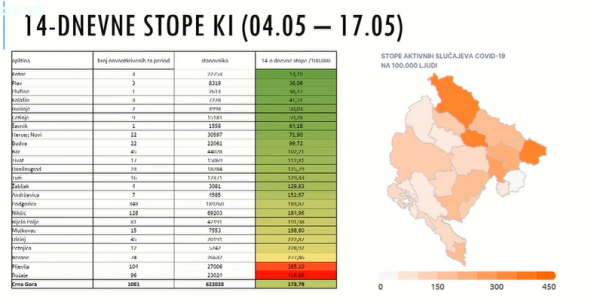 Morbidity at the lowest level since July 2020

Dr. Igor Galić, director of the Institute of Public Health, stated that the morbidity is at the lowest level since July 2020, except in August 2020.

«The average number of newly registered persons positive for corona in the last week was 76 and there has been a steady decline since March, „Galic said.

Of the average number of people tested in the last week of 1302, positive results on SARS-CoV-2 were 5.83%. According to Galić, there are 1,243 currently active cases, and the number of those infected has decreased about ten times in the last five months.

“The fourteen-day cumulative incidence per 100,000 inhabitants for the entire territory of Montenegro is currently 173.79 and this is the lowest value of this indicator since the public was informed (September 2020). There has been a decline in disease indicators in all regions of Montenegro.

»The most favorable epidemiological situation is still in the southern region of Montenegro, where there has been a decline in the incidence of 14-day cumulative incidence per 100,000 inhabitants, below 100," said Galic. 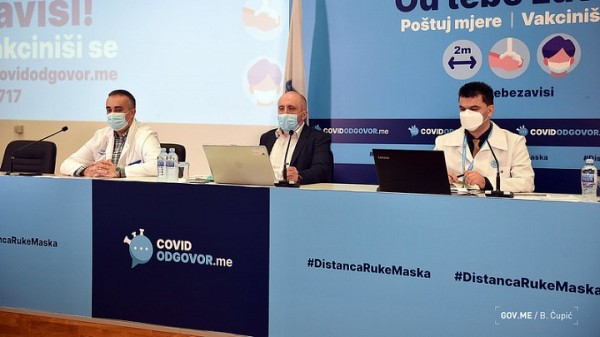 The southern region, as he points out, the country records a standard decline in disease indicators and the region has the least active cases.

«Compared to the disease indicators in the countries of the region in April and May, Montenegro records a better epidemiological situation than Croatia, currently close to Serbia. Compared to the countries whose important branch of the economy is tourism, Montenegro has more favorable values ​​of Cyprus, Croatia, Greece and Turkey, and approximately Italy and Spain, „Galic said.

Occupied less than 25 percent of the capacity in KCCG

The director of the Internal Clinic of the Clinical Center of Montenegro, Dr. Djordje Krnjevic, said that in the last three weeks, a significantly smaller number of hospitalizations with the most severe picture was noticed.

“Currently, as far as Montenegro is concerned, there are over 410 vacancies for covid patients,» Krnjevic said, adding that there are 39 patients in KCCG, of which 15 are life-threatening.

As he pointed out, less than 25 percent of the capacity in KCCG is occupied.

Among the dead and infected two months ago

“Namely, a lot of deaths that are approaching these days are patients who were hospitalized a month and a half or even two months ago, earlier when we had a worse epidemiological situation.

»Most of them are not newly infected patients," Krnjevic said. said Dr. Krnjevic and added that the average treatment lasts two to three weeks.

«However, we also have a large number of patients who have been with us for more than two months. We also had patients who were hospitalized and for five months, that's all there is to it these are patients who have suffered from malignant diseases », said Krnjević.